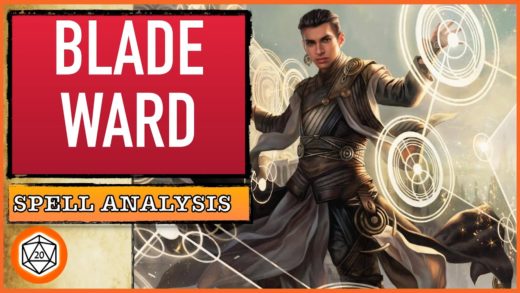 You can reduce the damage in one turn and you can reduce that risk in that one round as it is a cantrip so you can’t expect much in this spell. You can improve your action to do some damage.

While using blade ward 5e you have much resistance to many of the things. The rules of using this cantrip are very basic and that are you need to give up your action to become resistant to the three physical damage types. There are obviously some bad and good factors that need to be explained further.

Talking about the bad side of the spell that is why blade ward is considered as bad. It can be explained as it is because it has many limitations. The basic limitation that can be explained is it comes from the preciseness of its wording. It means that the resistance of the weapon is only gained to deal with those who are damaged. Talking more about this it means that if you take piercing, slashing damage, or bludgeoning from any of the sources the cantrip is not going to do anything.

An example of this can be explained as the falling damage that deals 1d6 bludgeoning damage for 10 feet whenever you fall like for every fall. It will go maximum up to 20d6 damage. If the spellcasters want to protect this they need to take the feather fall spell. And it will ignore the falling damage.

The other drawback of this spell is that it requires full action to cast. In this spell, you cannot use an action to dash, disengage, make an attack, cast a spell, or anything like this. So we can conclude that it is a bad point for any of the spells.

Talking about the good side of the DnD spell, it has many good points too. The good part of the spell is that you can protect yourself in any turn if by any chance you are caught in a bad position by a hostile creature. With the help of this, you can escape easily and rely on your party members as they can easily back you up. I know this is not great but with this you can save your life against something particularly dirty and at the same time it is not bad to use for a single turn.