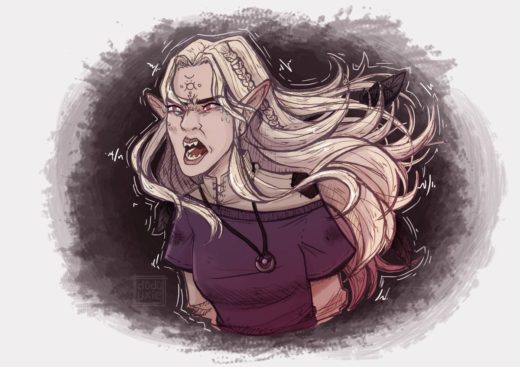 In this spell in order to sharpen your fingernails or your teeth you need to channel primal magic. Then you are ready to deliver a corrosive attack. You should make a melee spell attack against one creature and that creature that is within 5 feet of your range. When a hit is made the target takes 1d10 acid damage. Just after you make the attack the sharpen fingernails and teeth return to normal.

The idea of this spell is loved by many people. Druid seems like a nice and calm humanoid until they saw someone kick a puppy in the street. Then you should one thing that they popped claws and they went primal on that jerk.

If they make acid damage then it’s an odd thing for this spell. Although this doesn’t make sense to me thematically I guess this is a choice that is totally based on the game mechanics and balance. It was unbalanced at the start as a poison or it just straight up slashing damage. In this spell, only a few of the creatures have the resistance to acids damage than all the other creatures.

One thing you should know is that this spell primal savagery takes a whole action but it also includes making a melee attack making a part of this spell. A druid is also getting close and it is a person who might as well spam this every turn. This is better than most weapons druids are proficient in a long shot. On the other side, a spell attack is bypass resistance to non-magical weapons.

This spell is great at all. It’s not just great as fun but talking about the effectiveness of the spell is also very great.

If you want to make sense in the terms of flavor then only druids are the only casters who have the primal savagery on their spell list. On the other hand, non druids that are looking to cast primal savagery will have to either take the magic initiate feat or be a bard take the spell at level 10.