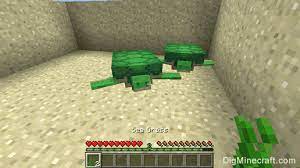 Well playing Minecraft is all about fun and having different things in the game. You can have access to a lot of things and you have different tools and equipment that are used in the game. There are also some creatures like horses, cows, turtles, and many more. Breeding them is important in the game and here we are with how to breed turtles in Minecraft.

Also Read: How To Breed Villagers In Minecraft?

Turtles in Minecraft have the ability to walk as well as float in water. Comparing the speed of turtles on land as well as sea is different as they travel slowly on land and whereas in the sea they swim quickly. In water, they wander aimlessly, and just like some other mobs they are threatened and flee. When the turtles are on land they try to get to the nearest water source that will have direct sky access.

There is something that is required in order to breed turtles in Minecraft and that is Shears. In order to breed turtles, the player needs to find two turtles that should be in close vicinity to each other then they need to find each of the turtle seagrasses till their hearts start to appear in the ability to mate. And then in the below guide, we are going to discuss in detail these steps.

Also Read: How To Make Glass In Minecraft?

How to Breed Turtles in Minecraft

Firstly talking about the material that is required is Shear and these are also helpful when you are trying to collect sheep’s wool. These are the most effective way to get wool from a sheep and they will generate 1-3 blocks of wool. Shear can be used on other items too in the game such as Pumpkins, Beehives, Mushrooms, and many others.

In order to breed turtles, you need to find two turtles that should be in close vicinity to each other and then you need to feed each of the turtle’s seagrass till their hearts start to appear above them. They will signal their ability to mate. After this one of the turtles will lay the eggs that will hatch to produce the baby turtles.

Also Read: What Do Chickens Eat In Minecraft?

After this, you need to find two turtles. I mean two-parent turtles and you can find the fully-grown sea turtles in the Beach biome. In order to find them, you can either walk along the beach or you can also dive into the water. You need to dig a hole in the sand around the two turtles as you can’t pick up any turtle in Minecraft and you can’t carry it to any place.

After that, you need to wait for the eggs to hatch. All that remains is waiting for the baby sea turtles to hatch. Do you know when they will hatch? They hatch at nighttime. Then the turtle eggs can be placed on any block that will be in clusters up to 4 and they can only hatch on sand or red sand. The eggs can be trampled all by living entities falling or also walking on them and they can be broken without tools. Many eggs are broken at a time when multi egg block is trampled. Without breaking the eggs a turtle can walk on them. Player can also use the silk touch drops in order to harvest eggs.

Then coming next to the baby turtles. These are the smallest mobs in Minecraft as they are very tiny like that of ender mites and silverfish. They will suffocate while walking on soul sand just because they were trapped in the space at the top of the block. Then the seagrass will be used to help the baby turtles to develop faster. This will help to grow their size by .01 of a block and it will reduce the period of growth by 10%.

Turtles have the ability to swim in a city if there is water enclosed in an area. In that case, players will make enclosures and they will rarely go on land in order to explore if there is any. Also, another thing that you need to know about them is that they cannot be attached by a lead and they can be led by a player that is holding seagrass within ten blocks of the turtle.

The turtle is the adorable creature that will wait for you at the base if you are out for a long day of exploration.

So this was all about how to breed turtles in Minecraft. I hope now you are clear with the steps still if you have any doubt then you can ask us in the comment section.