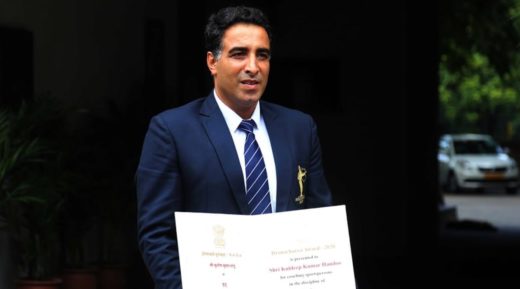 Kuldeep Handoo is the national head coach of the Indian Wushu team. He was born in Srinagar, Jammu, and Kashmir, but his family moved to Jammu due to Pakistani sponsored terrorism.

At first, Kuldeep started playing taekwondo when he came to know that Coach Vishal Sharma was teaching taekwondo and wushu training for free at the Raghunath Temple Complex in Jammu. He developed his interest in Wushu and gradually shifted to Wushu. He always had the support of his parents.

Kuldeep Handoo has participated in several National Wushu Championships and represented his state. He has been a national champion 11 consecutive times.

Kuldeep Kumar Handoo was appointed Deputy Inspector in the Jammu and Kashmir Police in 1998, and in 2005 he was promoted to the rank of Inspector.

Kuldeep Handoo is the only one from the state of Jammu and Kashmir to have received the Dronacharya award. He was elected by the President Ram Nath Kovind.