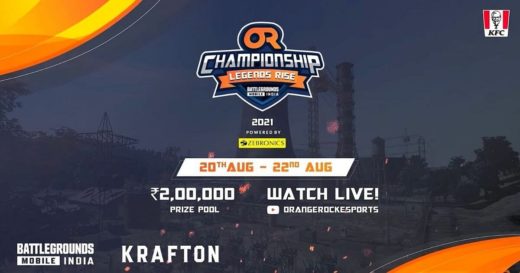 OR Esports has announced its first Battlegrounds Mobile India (BGMI) tournament, dubbed OR Championship – Legends Rise 2021. This tournament is only open to invite-only players and is scheduled to run between 20th, and 22nd August will feature an overall prize amount of INR 2.00 lakh ($2,689). OR Esports has partnered with KFC or Zebronics to host this event that will see the participation of 16 teams that have been invited directly to BGMI teams. 10 games will be played during the 3 days event. The prize pool to be split between those teams that are the best. In addition, OR Esports will also give away merchandise and swag throughout the competition to spectators.

OR Esports has announced OR Championship or BGMI tournament – Legends Rise 2021. The event will see some of the top teams in the nation competing for an INR 2,00,000. ($2,689 USD) prize pool. This is all you should be aware of about the tournament.

BGMI teams that are directly invited to the tournament are listed below,

The sixteen BGMI teams will go against one another in this tournament, held before the Battlegrounds Mobile India Series 2021, The first-ever competitive BGMI tournament.

The invitation-only tournament is scheduled to begin from the 20th to the 22nd of August; the tournament starts at 18:00 IST each day. Teams of 16 will compete in 10 games during the three-day event.

OR Esports has announced that it will be rewarding its viewers who view and interact with its BGMI tournament live during the stream. It will offer merchandise and swag during the event’s live stream, which viewers can take home when they follow Orange Esports on its official Instagram channel.

The exact details of the matter have not been disclosed yet.

The OR Championship: Legends Rise 2021 tournament will be streamed live through Orange Esports’ official YouTube channel starting at 18:00 IST for three days.