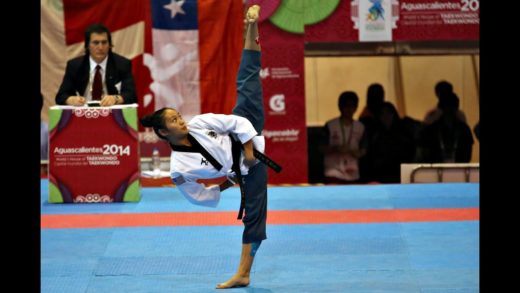 Taekwondo patterns, or poomsae, are divided into three main areas of concentration.

As one practice each pattern, one of the three main areas of technique, composition, and points of emphasis is highlighted within the pattern.

Generally, the interplay between these three facets becomes more complex as increasingly complex poomsae patterns are explored as one moves up the ranks.

The simplest poomsae has a different focus on technique, specifically stances, basic punches, and basic kicks.

Higher-level poomsae can weave more complicated techniques, complicated pattern composition with changes in direction and combinations of foot, hand and head position, etc. and different points of emphasis, such as smooth fluid movements with sudden and explosive movements of ‘power’ at different intervals.

Taegeuk Poomsae, those from 1 (il) Jang to 8 (pal) Jang are for the students of Kup (Gup) to learn and practice.

These Kup students are white belt beginners for those who are reaching the rank of black belt. The Koryo through Ilyo are Dan grade poomsae, intended to be studied by those with black belts and Dan ranks.

The taegeuk poomsae consists of 8 patterns based on the 8 signs of divination (Kwae) in the eastern science of divination. These divination signs are generally represented as a Chinese character that means “king.”

Taeguk 1 Jang represents the symbol “Keon”, which is one of the eight signs of divination.

Keon means “the sky” and also “yang”. Furthermore, Keon represents the beginning of all things in the universe and creation and is therefore an appropriate symbol for the starting point of taekwondo training.

The actions in this poomsae are basic and consist of walking back and forth, assuming simple stances and executing simple punch and block techniques, and adding a simple forward kick.

This is the first poomsae pattern that every taekwondo student learns and is reserved for 8th Kup students.

Oftentimes, students who have moved a couple of belts higher will help eighth Kup students teach them this poomsae, thus solidifying their knowledge by teaching others and contributing to the ‘culture’ of taekwondo where students help each other. yes to achieve the greatest possible success.

Although the pattern is simple, it is important and valuable to establish good “habits” in poomsae performance, and even a taegeuk 1 Jang done with precision, attention to detail, and the correct form will be an example of the skill of an experienced student.