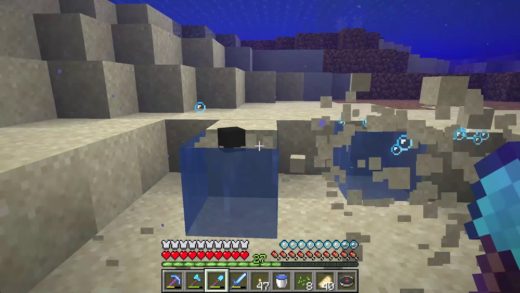 Now talking about the aqua affinity enchantment it will provide a utility to the player that will help the player to make their life a lot easier. It can make an easy task for the player in certain situations. Players in the game will find anything or any kind of item that is enchanted with an aqua affinity or see any of the options on their enchanting table will exactly know what it does.

What does Aqua Affinity do in Minecraft?

The players who are at the initial level of the Minecraft game should definitely know how to get the Aqua Affinity enchantment. They should know how to do this and the several methods to do this in Minecraft. The several ways to do this are they need to find a villager that will trade with an aqua affinity enchanted helmet, they need to enchant a helmet at the enchanting table,  they need to use an anvil and also an enchanted book. So from this, it is clear for the players now that this enchantment can now only be applied to the helmets.

Now here comes the question what do the enchantments actually do? And how does it help the players? It is helpful for the players in the way that they need to spend a lot of time building underwater. When the helmet is connected with Aqua Affinity will be equipped the speed of the player of breaking block will not be affected or it will not get reduced when they are underwater.

Talking about the normal circumstances when they are underwater it will eventually higher the time that will take to break the blocks but when this helmet enchantment is equipped then it will completely negate that effect. It might come in handy for most of the players when there is a lot of different time.

For the players in the game that loves to build while they are in survival mode then this Aqua Affinity is something that is a must for those players when they are making something underwater. All the players need to keep the track of their oxygen levels and they should be able to break the blocks fast as it is vital for them to speed up in the building process.

Even the players who are great adventurers will get a lot of use from this kind of block and in case they want to explore something underwater like a monument then it is great. Players will need to break the blocks if they want to find a way when any of the structures is submerged in the water.

This enchantment makes it easier for the player and it helps to consume to gather prismarine from underwater temples. It also removes the penalty for mining underwater for the players as it takes five more times for the item to be broken.

When the players are underwater they won’t be caught easily as it is situational enchantment and less number of players use this and it doesn’t always come into play.

Talking about the maximum level of the aqua affinity then it is level one. This means that you can enchant the item that you are choosing to enchant up to aqua affinity 1 and you can do nothing above that enchantment.

So this was all about the aqua affinity enchantment in Minecraft that you should know about in the game. If you know anything extra that we didn’t mention here then do mention that in our comment section we would definitely love to add that to our piece of work.