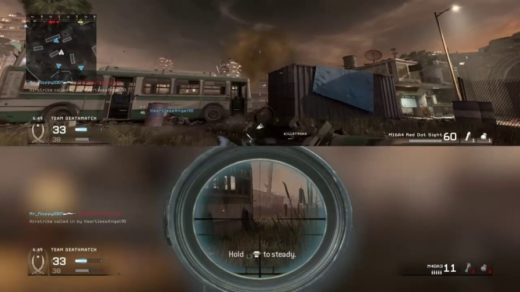 Call of Duty, a game that may not need much introduction. This game boomed the gaming industry and is now loved by millions of players worldwide.

The majority of the gamers still play on Xbox and PlayStation and Call of Duty is one of the best games that provides HD quality gaming. It offers various features to players such as providing flexibility in controls, sound, voice, text chat, and thrilling 3D graphics.

One of the most frequently asked questions about COD is about doing split-screen and playing 1v1 in COD. Players like to Split Screen in COD: Modern Warfare but don’t know how to do so. However, if you too are looking for a solution, we are here to help you.

How To Split Screen Call of Duty: Modern Warfare

Before moving further, you should pair two controllers by connecting the second one to your PlayStation or Xbox. Also, make sure that your companion must have an Activision account. If he doesn’t have one, you can create one by clicking here.

Is it Possible to Split-Screen on Modern Warfare?

There are some Call of Duty games that support split-screen.

How Many Players can Split-screen in COD Modern Warfare?

As COD Modern Warfare permits users to split-screen, only one additional player can join it. It means only two players can enjoy playing the game on a split-screen.

As mentioned, you will successfully split-screen. However, one main requirement is an Activision account. Without it, you cannot enjoy split-screen in Call of Duty Modern Warfare.