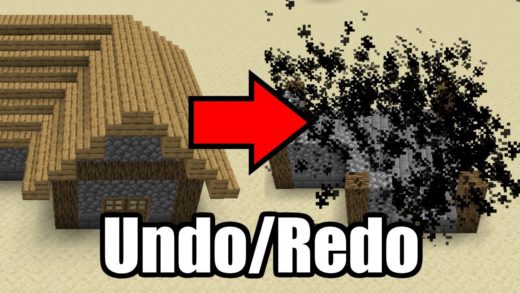 In Minecraft, it is necessary to construct and demolish many things. Sometimes, things do not go according to plan. There are times when you hit a button to start the massive Redstone system, or you could explode a TNT to build new objects or to let some space go. However, the wrong TNT triggers another TNT and ruins your hours of work. Now, you have to “Undo” command for your Minecraft world.

It is helpful to use /Undo when you’ve made mistakes using the /fill. Everybody gets frustrated when they’re unable to reverse the mistaken command. For instance, you can command /fill xa yb zc Minecraft: Air to get Minecraft air. However, you’ve lost your way, and you can’t remember to supply a yb with Minecraft: air substitute Minecraft: iron. You now have to start everything from scratch because of the incorrect command. It’s frustrating, isn’t it?

There isn’t a way to undo a command within Minecraft. However, we have a solution. These solutions allow you to add your undo to the command, and you can easily undo your errors.

Do The Undo A Command in Minecraft.

There isn’t a built-in Undo system.

However, if you’re ready for it, you could use the command /clone. It is recommended to copy the portion of the map (periodically) that you’re working on to another remote region. If you’d like to “undo” this, simply reverse the cycle and then clone the “backup” area into the “work” area.

Tips: Be sure not to duplicate from the building area frequently as it defeats the entire purpose. Make sure you clone the area periodically, perhaps every day or night?

If you’re on only one server and possess op rights, you can include redo and undo commands to your Minecraft.

How do I include redo and undo commands in Minecraft?

Today we’ll present the latest data pack created by SethBling for Minecraft 1.14. This pack includes redo and undo functions to Minecraft. To launch the interface, you need to enter”reload” or “reload.” This can only be used for a single user, and you need to be aware of the op privileges. When you have added the feature

If you’re on a server and create some blocks, then click undo, you’ll notice that the block disappears. To replace them, you can remove each block at once. It is also possible to redo every block at one time.

If you damage the Netta portal, It is possible to fix it by using the undo option one block.

If you mark the structure with TNT and then decide to remove it, just click undo. The design will be restored with TNT restored.

In any case, if you wish to use this undo and redo and undo functions, download the file ( Undo/Redo feature Minecraft 1.14 )

It works on a single-player or one player who is on the same server.

You are granted op privileges.

There isn’t a built-in command function to undo in Minecraft currently So, use the command /fill or /clone back up your Minecraft world. You can restore them if something happens to go wrong. This is the only method that’s reliable currently. We’re hoping soon Minecraft will include a redo and undo option for each server.

Fill the area that was damaged accidentally with the air

In the regular Minecraft version, you can’t reverse a fill operation. However, you can clear the area using air command.

Keep – Bury anything that is filled with objects

Replace – Changes a block choice to a specific block

Use the third tool from a third

You can utilize third-party tools such as MCEdit or WorldEdit to use the undo option. This lets you erase anything you have a built-in error or restore the item that was accidentally destroyed. Through a 3rd part program, UNDO can be used using procedural functions ( fill ) as well as with components that are deleted at a click but requires plenty of input to build ( NPCs and Boards)

Due to the scattered numbers in the coordinates, if you have filled the space of your structure with blocks rather than building walls, you can retrieve it by using the /undo feature. If you happen to cause damage to an NPC as you are removing blocks surrounding it, you could get it rebuilt by reversing the function. You won’t require another 20-30 minutes to restore it.

Use the/fill command to reverse the action

Today, we will demonstrate how to use the fill command to perform an Undo command that allows you to eliminate specific structures or objects in the game. This command can get rid of clones, too. For instance, if you intend to clone a tree, you accidentally clone the tree into the wrong location. You can use this command to eliminate it. You’ll require some coordinates to accomplish this.

How can I utilize the command /fill to undo something from Minecraft?

To clone a tree, you must surround the tree in a box that has two coordinates. The first is the bottom coordinate, and the other is 30, 67, or 0. Keep these numbers in mind. It is possible to write them down using a notepad. Then, it will help to go upwards and diagonally. Then, you’ll be left with 20,85 and -10. This is all you have to do is fill 30 67, 020 85, 10 air. There is no need to add the commas or any other characters in between these numbers. You can see that the tree has gone.

In this way, you can eliminate an area or structure by using the /fill command. It’s also useful. For instance, if you construct a temple in an area, you do not want the temple to be. The /fill command can be used to take away the temple. You can then create what you’d like within the space. If you happen to copy something, you can erase them with”fill.

These two coordinate sets form two corners of the cuboid area you’d like to test. The third set coordinates define the lower northwestern area of the cuboid you’re trying to test the first region as well. Both regions are identical in terms of size.

In the most recent Java edition of the Minecraft version of Minecraft, you can indicate the area of your object is the lowest northwestern corner using the F3 button and by looking at the axes at the center of your screen. Whatever angle or region can fit into these axes is the lower northern corner of the area. A similar trick applies to that /clone option.

In the most recent version of Java Edition Minecraft, you can determine which part of your building is located at the lower northwestern part using the F3 key. By looking at the axes on the middle of your screen, the angle or the region you are in can fit into these axes in the lower northern corner of the region. The same technique applies to the command /clone.

Suppose you are unable to do anything right now when you construct a structure or object in error. If you wish to get rid of the area, you’ll need to use a lot of TNT to eliminate the structure or object. It’s a pain. However, it could solve the issue at times.

We all require methods to build or eliminate the structure of your Minecraft world. The command /undo can be helpful for this purpose. Because if someone creates an error in their building, there’s no way to get it back until you reverse a command. Even though there is no way to reverse the command in Minecraft, We will show you an option so that you can correct your mistake in a brief time. We’re hoping that shortly, Minecraft will add redo and undo commands for the upcoming Minecraft versions.