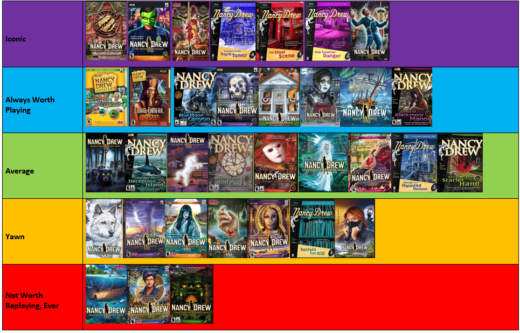 Legendary sleuth and crime-solver Nancy Drew Since 1930, when she appeared in the book series that would make her famous, she has been solving crimes and stopping criminals. Nancy Drew has been a part of movies, TV shows, and video games ever since.

Although her video games may not be as well-known as her movies or books, Nancy Drew still has the same intuitive flair that she is famous for. These games usually involve solving a central mystery, and the gameplay is focused on character dialogue and puzzles that the players must solve.

Messages in a Haunted Mansion

Nancy Drew is not afraid of ghosts. She has met many spirits while travelling around the globe, but they are usually just silly criminals dressed in costumes. A Message from a Haunted Mansion examines the paranormal activity in old houses. Nancy is asked to help a friend transform their old house into a bed & breakfast. But ghosts are not what she expected. As players hunt for clues, many creepy rooms and corridors to explore.

Secrets of the Scarlet Hand

Nancy is looking forward to a summer internship at a Washington D.C. Museum. But things quickly get complicated when one museum’s most prized possessions are taken, and all that is left is a red fingerprint. This game is a great thriller with the puzzles being pushed to the next level.

Nancy, always one to find trouble wherever she goes, finds herself in serious trouble when she embarks on a whale-watching trip in the north. She discovers a sinister plot that revolves around a newborn orca whale and the bizarre characters living in the nearby fishing community.

As Nancy starts to snoop around, it is clear that there are ulterior motives. A darker plot emerges. This is a shining example of the variety of the game series, particularly in terms of setting, characters and mysterious intrigue.

Another disturbing entry in Nancy Drew’s Nancy Drew series is Curse of Blackmoor Manor, where Nancy travels to England to visit her neighbour’s child. However, she discovers something is wrong with the frightening 14th-century manor she is staying in.

This classic version of a well-known formula is complemented by the original backstory and characters that make it one of the most engaging Nancy Drew games. This game is notable for its stunning graphics and design. It is also fun to play. Although it does explore darker themes, these are welcomed changes for the franchise.

Legend Of The Crystal Skull

Nancy travels south to New Orleans to find herself in a dark plot involving an estate of a deceased man and a mysterious crystal skull that is supposed to protect its owner against all forms except murder.

Things get more bizarre when she is attacked in a skeleton suit, and the game’s events take a strange turn.

Nancy’s friend is abducted from a creepy theatre while visiting to see a film’s premiere. It’s a race against the clock. Nancy must use every trick she has to save her friend and unravel the mystery of the old theatre’s history, as the theatre is scheduled to be demolished within three days.

The story is full of twists and turns, and the stellar dialogue and the character personalities make this one of my favourite games.

Nancy Drew is again faced with a supernatural mystery involving a haunted amusement park. The park owner contacts Nancy Drew to get her help. She finds herself in a clue-driven mystery that not all people are who they claim to be.

The game is a mix of mystery and puzzle games, with a creepy story that wraps it up. Both critics and players gave the game rave reviews. They noted that the puzzles were both intelligent and engaging. This is not just one of the most Nancy Drew games; it is also one of the greatest adventure games ever.