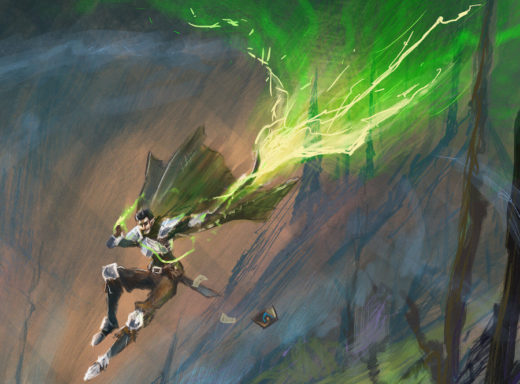 Green Flame blade spell is a spell from sword coast adventurer’s guide. The level of the spell is a cantrip. The casting time this spell takes is 1 action.

Using this spell you must attack a melee with a weapon against one creature with the spell range. If this is not done then the spell fails. With the normal effects, the target suffers when a hit is made.

The green fire leaps from the target within 5 feet when the target is of your choice and it’s of a different creature. The second creature takes the damage equal to the spellcasting ability modifier.

When the spell reaches level 5th the melee attack has to deal with extra fire damage of 1d8 and it reaches more when it increases and goes to the next level. When the level reaches 11th level and 17th level both damage rolls increase.

The action will be an attack with a weapon and it will basically be a melee attack. Normally it will attack the primary target. Then the splash will hit another target and it will be within 5 feet. When it is at level 5th there will be a spellcasting ability modifier and then it will increase to d8+sam and it will go on.

Within the range of 5 feet, there should be another visible target for extra damage to trigger. It’s not great for casters that the used strength is a dump stat and you have to hit with it.

The attack you are going to make with a melee weapon so it wouldn’t work if there is an unarmed attack.

For the cinematic role-playing quality it would be fun to have a monk build with this spell. With the help of your strength roll, you have to attack the hit.

Although we know that it is a fun DnD spell and it is altogether great to use. But you should also keep in mind that it gets stronger at a higher level and it can be boosted and twinned and many such things it can do. Your opponents will get stronger at those levels and you know what? It’s cool to get extra damage from 3d8 and also attack plus 3d8 splash on the other target. You can do this without burning the real spell shot. Isn’t it cool?