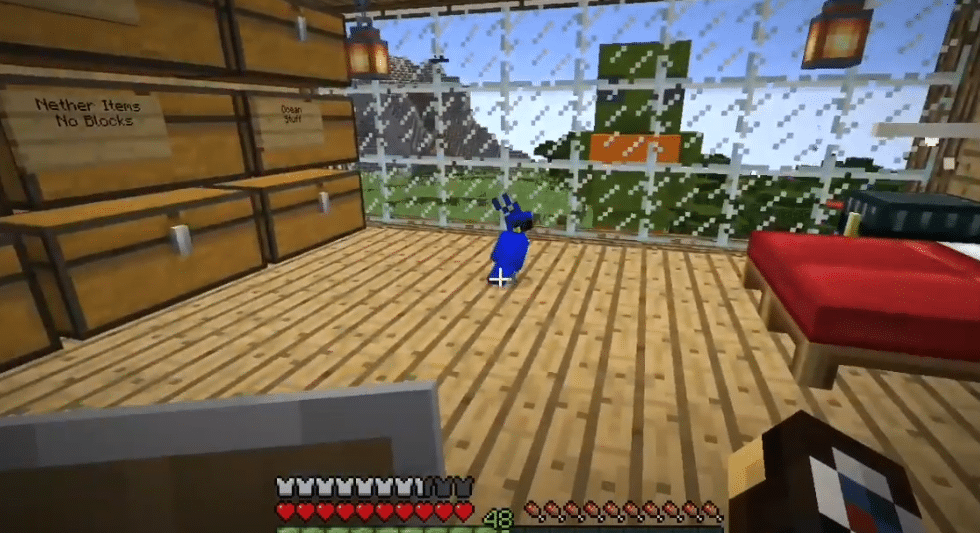 Minecraft has made a huge fan base due to its gameplay and the functions that the game offers. There are many things in Minecraft that will attract the players to play it. You can just live your life in the game. There are many different tasks and there is so much creativity in the game that you can’t resist playing it. It comes with unlimited possibilities. Do you know how to get parrot off your shoulder in Minecraft?

Also Read: How Deep Is Buried Treasure In Minecraft?

Well, it’s not that tough and we are here for a solution to your question. Talking about Minecraft you can just imagine with your creativity what you want to mine and then you can craft it in the game. There are also several mobs in the game that make it a bit more interesting. They can attack you or also they can hurt you. Similarly, parrots are also the mobs but these will not attack the player.

You can find these parrots in the jungle biome. The only job of the parrots is that they will imitate the sound of the hostile web that will be near to the player. But sometimes it’s get too much irritating for the players when the parrots get on their shoulders. But worry not you can get them off your shoulder in Minecraft.

So let’s start with how to get parrot off your shoulders in Minecraft. We are going to tell you the procedure and that’s all you just need to follow in order to avoid that irritation. We are also going to tell you more about parrots so keep reading.

How To Get Parrot Off Your Shoulder In Minecraft?

Firstly let’s here discuss about the parrots what their role is in the game and what they exactly do to the players. Parrots are the mobs that can detect the other mobs from twenty blocks and they will also sit down on the shoulder of the player. There are also different colors of parrots and those are cyan, red, green, blue, and gray. There is color difference in the parrots due to the various species of macaw.

Parrot has also six health points and you can get them when you have one. Parrots do not come with any weapons and it will never attack you. It will not help you to fight against any of the enemies as it doesn’t have any weapons. But one thing that the parrot does is they will warn you against the enemies in order to make you ready to fight.

You can also teleport the parrot but within a sufficient distance. They can only be teleported when the distance between the player and the parrot is measurable. Parrots do not deliver babies. Just like some of the creatures in Minecraft like skeleton horses, mules, the polar bear parrots also do not breed in the game. When you will feed a cookie to a parrot then it will get killed. Another thing is when you will play some music in the jukebox then they will start dancing. Parrots can not walk on the land. In order to avoid drowning they will start to flap their wings in the water.

How To Get A Parrot Off Your Shoulder In Minecraft

There are also different commands that you need to follow in order to make the parrot part off the shoulder. The different commands can be explained as parrotrelease, releaseshpulders, or the other one is prel. You can use any of these commands in the game. For using them you just need to press the left or the right button that will depend on the shoulder on which the parrot is sitting on.

On the other hand, if you want to convert the parrot to eggs then you can type parroteggify, pegg. For this command to use you need to press the left button or the right button. You can only do this in the town areas.

Another thing that we have told you above is they are very rare mobs and these are not good enough, as they will only keep you warned against the enemies and they will not help you to fight. They will also get tamed if they are fed only. You can use the same items to feed cats or wolves in Minecraft. Whereas wolves, when fed with the same items, will help you to fight against the mobs and the cats when the fed will help you to scare away the creepers.

The sound that the parrots make will make you wonder if the mob has attacked you or not and it will not tell you exactly rather it will irritate you with the sound. It will only warn you and will not help you to fight against the mobs.

You can make the best use of resources for yourself and help yourself while playing the game. You need to keep in mind that you have to avoid those things that will act as a burden for you in the game. Although this will help you to stay away from enemies sometimes you need to get the parrot off your shoulder.

So this was all about how to get a parrot off your shoulder in Minecraft. We told you the procedure with the help of that you can easily make their getaway and we also told you about how the parrots help you in the game. If you have any other doubt then you can ask us in the comment section.

Have a happy time playing Minecraft.