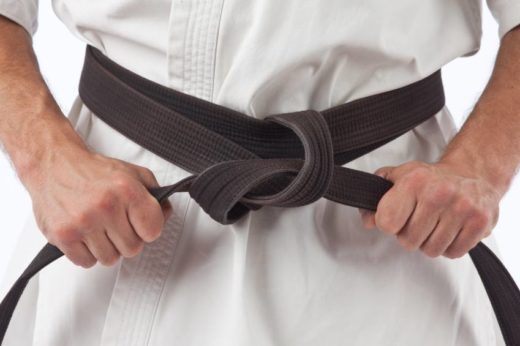 The Taekwondo Belt Grading System in Order of Colour

In order to know about the Taekwondo belts meaning, we must know why there are different belt levels.

Grading or ranking is the act to classify something on a scale by quality, rank, etc and it has been an important part for all of us.

Similarly, Taekwondo belt grading is important for all the students of Taekwondo. In terms of taekwondo, the word”grading” means a promotion or to level up the belt(in series which starts from white and ends up at black color).

This shows the progress of a student. Moreover, belt rank in taekwondo sport evaluates one’s ability, knowledge, and physical conditioning.

How many belts are there in Taekwondo?

There are six main belts in taekwondo according to the World Taekwondo(aka WTF). However, it may vary from country to country or Federations.

What is the order of belts in taekwondo?

The belt order consists of a taekwondo belt chart which is;

These are the six main belts in taekwondo and there are deep philosophy and meaning behind each color belt in taekwondo. I have mentioned below all the taekwondo belts and their meanings in order of color.

Thus, everyone who is new to taekwondo starts with the white belt. This belt is not earned and hence there are no steps to get white belt rank.

You will learn the basic components of taekwondo as a white belt such as blocking, stretching, kicking, basic stances, etc, and some Korean terms such as numbers count, names of kicks, blocks, and many more.

It doesn’t take too much time to learn all these but to be perfect in all kicks, stances, poomsae, etc, it can take years.

The journey of forms (poomsae or patterns) starts from here. You will learn the combination of patterns( These are the combined series of techniques that you learned). There are several patterns for each belt.

Usually, in two or three months, an individual proceeds to the yellow belt after learning the basics of taekwondo.

Yellow is the color of sunshine and freshness. A yellow belt in taekwondo signifies the first beam of sunlight and the earth when a plant sprouts a root. It shows that the taekwondo foundation is being laid. The yellow belt is not given to anyone in starting, so you can say that you earned this belt by qualifying the belt test.

Being a yellow belt student;

Basically, Green is the color of nature and it symbolizes growth, freshness, and fertility. But in Taekwondo, the green belt signifies the growth of a seed that is ready to grow into a plant.

Being a green belt student, you will make yourself stronger as well as continue to refine your techniques.

Being a blue belt student, you have passed the half test for a black belt.

Moreover, the meaning of the Blue belt in taekwondo is the significance of the sky which means that the plant is continuously growing towards it. It shows that the student is keeping growing until and unless he does mastery in his art.

A blue belt student is taught some additional knowledge of Taekwondo martial art in order to continue to grow and develop his mind and body.

Generally, it takes six to seven months to get an advanced rank in the blue belt.

The red belt in Taekwondo is the color that represents energy, danger, determination, and passion. The red belt signifies danger. It is the beginning of a student to become dangerous with his/her knowledge and abilities.

As a red belt student acquires more knowledge, he/she should be more careful to avoid problems or dangers.

The black belt is the opposite of the white belt and is the combination of all the colors of the spectrum of the rainbow. It signifies the darkness beyond the sun and the maturity of a taekwondo player.

Moreover, a black belt has a high rank and it is really hard to get a black belt in taekwondo. Being a black belt student, you are capable of teaching other students and continue yourself to learn and achieve skills and reach new levels.

What comes after the Black belt?

There are more belts after the black belt in taekwondo that come in series from black belt 1 dan to black belt 9 dan but the main belts are only six that are mentioned above. But still, some people have the misconception that there is a purple belt in Taekwondo.

Most people aim to get the black belt as a taekwondo student. Some of them practice a lot to get it and some leave-in middle.

The highest taekwondo grading of the belt is black belt 9 dan.

How long does each belt take in TaeKwonDo and how to achieve all these belts?

Generally, students have a taekwondo belt grading test every 3-6 months where they have to perform patterns and several tests and after each color belt test, a certificate is given.

Can you skip belts in Taekwondo?

Yes, you can skip the belt test in taekwondo and can directly get the Black belt only if you have previous experience in Taekwondo sport. But the belt test will be very hard.

Belts are not awarded to students for practicing in hours or participation in contests such as state and national championships but to get an advanced rank in taekwondo, a student has to demonstrate his skills and should prove that he has mastered all the techniques he learned till now.

There is no doubt that the taekwondo techniques seem simple but it takes years to master the techniques.

Taekwondo belts meaning for each color indicates the skill level of a taekwondo player and shows the ranking of a player. It differentiates junior to senior. The taekwondo belt color order reflects the progress of a student in the class and endurance level of the sportsman.